The body of slain militant commander, Burhan Muzaffar Wani, was handed over to his family at Dawn on Saturday.

Thousands of people were waiting the arrival of the body which reached in a long cavalcade.

Reports and locals said that people from all areas have converged in main Tral town where Nimaz-i-Jinazah of the new age militancy poster boy is scheduled to take place in Eidgah.

Burhan Wani, who led an almost seventeen member militant group, died in a gun battle with Special Forces from Cargo Srinagar, SOG and Army’s 19 RR in Bumdoora area of Kokernag in South Kashmir. Two more rebels lost their life in the encounter and they were identified as Sartaj Ahmad and Parvez Ahmad.

Sartaj lived was local of Kokernag area while Parvez was identified as one who belonged to Tral belt. On Friday when the operation ended police had identified him as one from Srigufwara area.

Reports coming from Tral said that tens of thousands of people area present while more are on way to Tral. The Jinazah will take place at 11:30 AM.

Sartaj’s body was handed over last late night to his family. 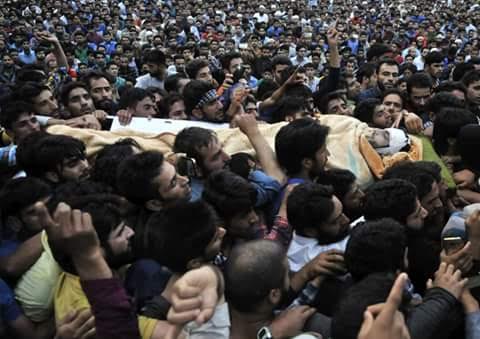 Burhan Wani’s dead body was handed over to his family at Saturday dawn.