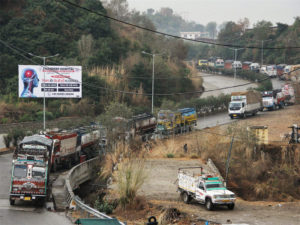 The closure of Srinagar-Jammu highway has caused worry among the growers as their fruit laden trucks continue to remain stranded on the way from past three days.
The truck drivers told that they are not being allowed to move towards Jammu from past three days, which has resulted in immense hardships to them and has caused damage to the fruits as well.
“We are awaiting the orders of the authorities to reach Jammu but unfortunately three days passed since we have been stopped here,” the drivers said, adding that they are facing severe hardships from past three days on the highway and demanded authorities to allow them to reach Jammu at earliest
Notably, the traffic on the highway was closed by the authorities following a massive landslide at Morh Passi in Udhampur district damaged a bridge and blocked the road.
Meanwhile, the fruit growers said, “In case the fruit laden trucks will not be able to reach Jammu mandis on time, the fruits will rot on its way and the taste as well as the quality will also start decreasing.
They said that the authorities should have allowed the fruit laden trucks to reach Jammu fruit mandis on priority basis. “We appeal the authorities to look into the matter and fulfill our demands at earliest,” they demanded.
Meanwhile, the officials said that the traffic was closed due to the landslide in Udhampur. “The men and machinery has been pressed to clear the roads. We today allowed the Light Motor Vehicles (LMVs) to ply from Jammu side today and the decision for tomorrow’s plan will be discussed in late evening hours,” officials said. (KNS)
Tags: fruit truckstrucks stranded on sgr-jammu highway

Culture of anonymous complaints is to be discouraged: Govt