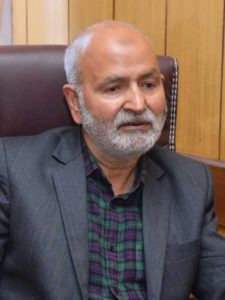 Taking strong note of use of sub standard material in road construction in Kupwara district, Minister for Public Works, Naeem Akhtar has ordered “strict” action against an engineer and a contractor.
While visiting the border-district today for taking stock of roads and buildings, Akhtar inspected Drugmulla-Keygam road and as per officials found sub-standard material being used by the contractor.
The minister ordered strict action against the engineer and contractor who were assigned for the construction of the road.
Fayaz Hamid, the minister said that he has ordered strict action against the engineer and the contractor.
To a question about coolies of the department not looking after the roads, the minister said that he will ask the Chief Engineer of the department to look into the matter.
Officials said that atleast 400 coolies of the PWD are paid for looking after roads in the department in the district. (KNS)
Tags: action against engineer & contractornaeem akhtar