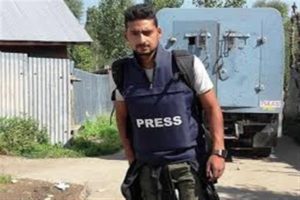 Authorities should immediately release Kamran Yousuf, a freelance photojournalist who was working in the Jammu and Kashmir region and has been held without charge since September 4, the Committee to Protect Journalists (CPJ) said today.

When reached by phone, an NIA spokesperson, Ajay Mittal, declined to comment to CPJ. “The Jammu and Kashmir region has been especially volatile since the militant leader Burhan Wani was killed in July 2016, and authorities have sought to reassert their control, in part, by cracking down on the media, CPJ has documented,” the journalists’ body said.

Meanwhile, Kashmir Editors Guild (KEG) today expressed serious concern over the continuous detention of freelance photographer Kamran Yousuf. In a statement issued here, a KEG spokesman said that the agency NIA has arrested Kamran Yousuf without spelling out the reasons and that doesn’t get with the set legal norms prevalent in any democratic setup.

KEG has asked the authorities to release the photographer immediately and has appreciated different media organisations that have expressed concern over the arrest. Yousuf was arrested by the National Investigation Agency (NIA) on September 5. (GNS)

Mother ‘badly thrashed’ by son over a domestic scuffle in Islamabad village.