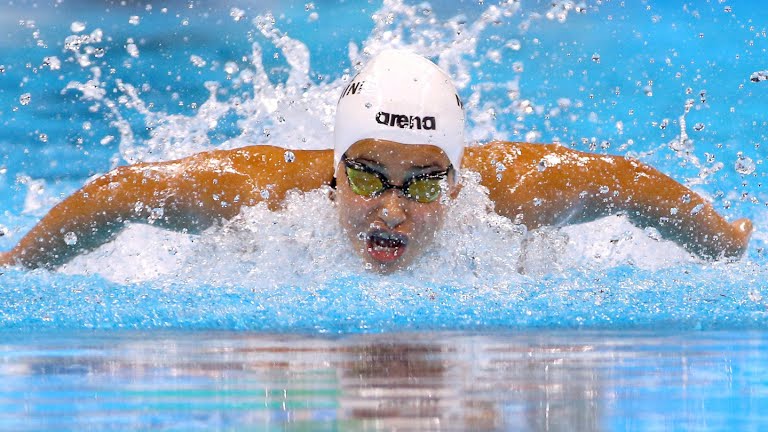 Mardini was a talented swimmer in war-torn Damascus and professionally backed by the Syrian Olympic Committee. As unrest in the besieged country escalated, she would often find herself training in pools where roofs had been blown open by bombings. “Sometimes we couldn’t train because of the war,” she said. “And sometimes you would be swimming in pools where the roofs were [blown open] in three or four places.”

Damascus became increasingly unstable and Mardini and her sister Sarah eventually left Syria, travelling through Lebanon and Turkey before trying to reach Greece.

Thirty minutes after setting off from Turkey, the motor on their boat, which was meant for six people but carrying 20, began to fail. Most of those on board it could not swim. With no other alternative, Mardini, Sarah and two strong swimmers jumped into the sea and swam for three hours in open water to stop their dinghy from capsizing, eventually reaching Lesbos.

“We were the only four who knew how to swim,” she said of the experience. “I had one hand with the rope attached to the boat as I moved my two legs and one arm. It was three and half hours in cold water. Your body is almost like … done. I don’t know if I can describe that.”

But while she now hates open water, the memory is not a nightmare for her. “I remember that without swimming I would never be alive maybe because of the story of this boat. It’s a positive memory for me.”

After Lesbos, Mardini and Sarah travelled through Macedonia, Serbia, Hungary and Austria before arriving at their final destination: Germany.

Mardini is equally remarkable for her self-effacing attitude and resilience as she is for her life-saving act. “It’s tough,” she has said. “It was really hard, for everyone, and I don’t blame anyone if they cried. But sometimes you just have to move on.”

Mardini has now settled in Berlin, where she was put in touch with the Wasserfreunde Spandau 04 swimming club and taken on as a member. Quickly realising her potential, Coach Sven Spannekrebs began considering Mardini for the 2020 Tokyo Olympics. But her road to the Games turned out to be a much quicker path.

Mardini trains for two to three hours every morning, attends school and then continues to train in the evening.

According to the Guardian, Syria has been monitoring her swimming career and asking for regular updates.

Tackling the dehumanisation of refugees

“I want everyone to think refugees are normal people who had their homelands and lost them not because they wanted to run away and be refugees, but because they have dreams in their lives and they had to go,” she said at a press conference announcing her place on the team.

“Everything is about trying to get a new and better life and by entering the stadium we are encouraging everyone to pursue their dreams.”

She also has hopes one day that peace could be brought to fruition in Syria and she could take her story home.

“Maybe I will build my life here in Germany, and when I am an old lady I will go back to Syria and teach people about my experience.”

A Report from ‘The Independent’