Doctors Lead a Protest March at SKIMS Soura, Against the use of Force and ‘Non Lethal Weapons on Protesters 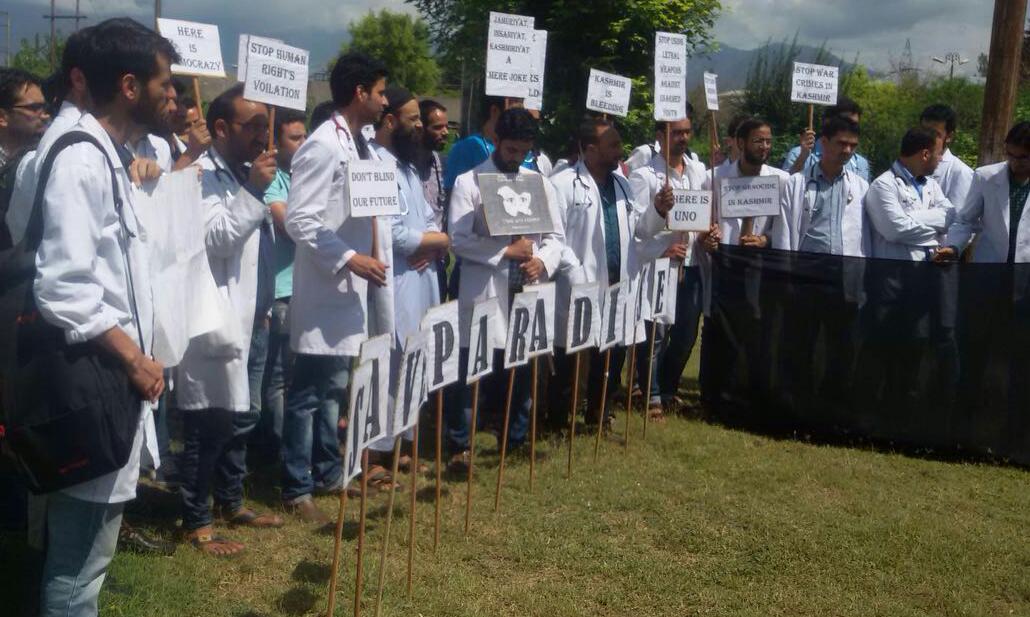 Dozens of Doctors assembled at skims and led a protest march against use of force and brutal killing in Kashmir. The protest was led by Dr. Burhan Bazaz, while talking to media persons Dr Burhan Bazaz said ” The force and lethal weapons used against peaceful protesters in Kashmir is being highly condemnable. The 60 killings which took place in ongoing turmoil in Kashmir is not about 60 persons but is the matter of 60 Dynasties. Being Doctors we can feel the pain of the bullet and pellet victims and what it cost a Doctor to treat the injured.

The protest was organized by Doctors who are considered to be the cream of the society, in solidarity with the people of Kashmir and this is a message to the world community that Kashmiris are united against atrocities committed on them.The ongoing movement is supported by all sects of society irrespective of their status”

Dr Burhan hailed the protest organized by all those Non state subjects outside the Kashmir valley and in rest of the world. Besides that, later on in the day Dr Burhan Bazaz held a free medical camp at Badamwari, Hawal where people in huge numbers from adjacent areas got free medical consultation along with free medicines.

Tags: Doctors protest against the use of Force and Non Leathal weapons on Protesterskashmir crisisKashmiri Doctors Protest

A.S Dulat Stands Against the use of Pellets and Bullets;Up for Serious talks Between Delhi and Kashmiri People

Curfew to be Imposed in Every Part of Srinagar Tomorrow