Weapons Used In Kashmir In the Last 14 Days

In all this over a fortnight-mayhem which Kashmir streets witnessed, epicentered in South Kashmir, use of pellets has come under sharp reaction as it has already consumed two lives while maiming hundreds. Over 50 youths are set to lose their eye sight.

In all this, the para-military CRPF has been vying for it saying “they have no other alternative”. This, despite the fact, that Union Home Minister Rajnath Singh has announced for review of the lethal gun. 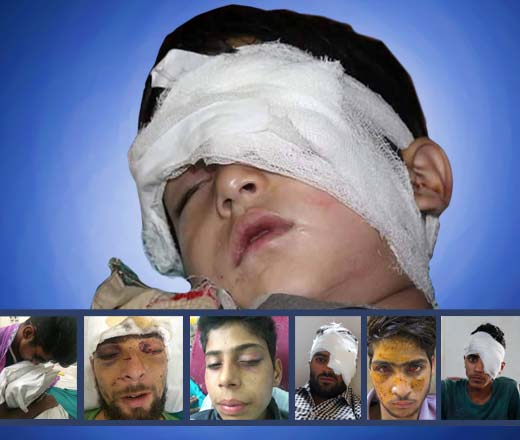 Although forces agencies have been “repeating” pellet gun is a “non-lethal” weapon, however, the CRPF Director General K Durga Prasad, in his interview to The Indian Express “accepted” that it was “lethal”.

“They (pellets) are the last resort for us. Only after all non-lethal options are exhausted, pellet guns are used. But we are pained to see the blindings and injuries to young people. We are looking at how we can minimise the damage,” he had said.

The report said that the use of pellet gun comes only after tear smoke shells. The CRPF has revealed that use of pellets is “the most effective weapon” against stone pelters.

The non-lethal weapons used by CRPF in the Valley include plastic pellet guns, rubber bullets, stun grenades, multi-button shells, blank rounds, pepper balls and capsicum grenades. All have been used in the recent protests, the CRPF sources told the New Delhi based newspaper.

The forces started using pellet guns, once used for hunting by Britishers in Kashmir, in 2010 mass uprising.

No need to hold talks with separatists: BJP