I might prefer to resign sooner than later; Shah Faesal Confronts Indian Media on FB

Faisal, who threatened to resign if the “non-sense” continues said, “when I qualified this exam I never thought of spending my whole life scratching the desk and if this nonsense around me continues, I might prefer to resign sooner than later.”By just posing my photos with the images of a slain militant commander, a section of national media has once again fallen back upon its conventional savagery that cashes on falsehoods, divides people and creates more hatred”  he wrote on Facebook.

“By juxtaposing my photos with the images of aslain militant commander, a section of national media has once again fallen back upon its conventional savagery that cashes on falsehoods, divides people and creates more hatred”.
He said while Kashmir is mourning its dead, “the propaganda and provocation being dished out from red and blue newsrooms is breeding more alienation and anger in Kashmir than what Indian state can manage.”
“Personal vulnerability apart, the very fact of becoming a part of a ridiculous debate is something which has disturbed me very much. Have I joined IAS to do a job or to become a part of your sadistic propaganda machine? I am adding to what my younger colleague Yasin Chaudhary had said earlier in his Facebook post. ZeeNews Aaj Tak TimesNow and NewsX are not going to tell you the truth about Kashmir. Please mind your head,” he added. 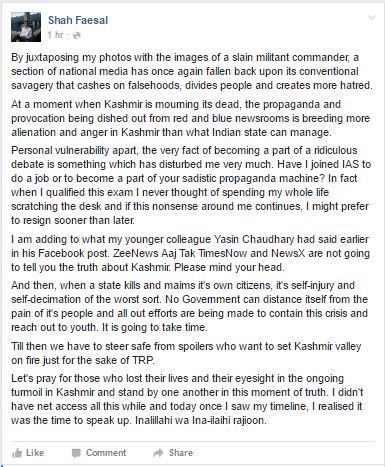 Major Arya's Open Letter to Burhan Wani, and AN INDIAN CITIZEN replies back

Curfew in Baramulla, Islamabad on Saturday; Sec 144 CrPC in Pulwama