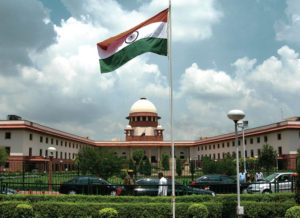 A promotee Indian Police Service (IPS) officer cannot claim seniority based on the length of his service and it will depend on the day of his induction in the All India Police Service, the Supreme Court has held.
The apex court said that a promotee officer getting a higher pay and grade pay on account of his long service will itself not give him the right to claim seniority over the direct recruits in the IPS getting a lesser pay band.
A bench of Justices Kurian Joseph and R Banumathi set aside the order of Delhi High Court which had held that since the 6th Pay Commission Report has been accepted by the government in toto, the seniority of an officer will have to be re-fixed based on the grade pay.
“We clarify that the seniority in IPS will depend on the date of induction to IPS and it cannot be based on the length of service in any other service prior to the induction,” the bench said.
The Delhi High Court had on April 22, 2013, diected the Centre to amend the seniority rules in the IPS on a plea of two 1987 batch DANIPS cadre officers, Raj Kumar Jha and Suvashish Choudhary, challenging such rules and terming them arbitrary.
It had directed that Jha shall be inducted into the IPS on his submitting an unconditional willingness, as a junior officer cannot draw a higher grade pay than seniors.
The apex court in its verdict said, “to put it in clearer terms, merely because an officer in DANIPS working since 1987 is getting a higher pay and grade pay on account of his long service and that pay band being protected while induction to IPS, that by itself will not clothe him with a right to claim seniority above the entire direct recruits of several years who naturally would have been only on a lesser pay band having been in service only after direct recruitment.”
The apex court said there were umpteen number of situations where a senior officer in a service will be drawing a lesser pay than the junior.
“The instant case is a classic example. The respondent- officers who had been serving long elsewhere (since 1987 in the DANIPS), got a lateral induction into IPS based on their merit and seniority. While inducting them into IPS, they were given a year of allotment and placed below the direct recruits of that year,” it said.
The bench said that the officer who had been working in a different service gets pay protection while getting inducted into IPS and necessarily that officer will be drawing a higher pay than the direct recruit to IPS of the year concerned.
It said that those officers who have been inducted will have different pay band and grade pay.
“The grade pay is to operate among the officers of the service prior to induction and not qua the officers belonging to a different service after the induction.
“In other words, the fixation of seniority based on grade pay is among the officers inter se of the same service and it has nothing to do with the grade pay in the starting scale of direct recruits in a different service, i.e. IPS in the instant case,” the bench said.
It said that the situation would have been different had there been no pay protection at the time of induction and “just because the pay has been protected,that by itself cannot enure to an added advantage of seniority over the direct recruits who have already been in the IPS for quite a few years when the officers were inducted from the DANIPS”.
While setting aside the order of the high court, it said it is a well-settled position that the court cannot direct for any legislation and the 6th Pay Commission Report has nothing to do with the fixation of seniority in a service as it is governed by the rules of the service.
“There are umpteen such situations where a junior officer would draw higher pay, including the grade pay. There is no dispute that the seniority in IPS is to be fixed on the basis of the length of service in IPS.
“It cannot depend on the service rendered by an officer in a different Service prior to induction to IPS. That will be cutting at the root of the fundamental principles on the fixation of seniority,” the bench said.
It said that direction of the high court to amend the provisions of IPS (Appointment by Promotion) Regulations, 1955 and the IPS Pay) Rules, 2007 is set aside.
Tags: 6th Pay Commissionapex courtAppointment by Promotiondisputefundamental principlesgrade payIndian Police Servicejunior officerRegulations

Hurriyat not in the list of delegations meeting us: Azad