Discriminated, tortured, and forced to resign, story of a Kashmiri Muslim.

DISCLAIMER: The names of people, names of places have NOT been changed,  because we believe that the people who discriminate should be unmasked in front of the public.

This is a story of a Kashmiri Muslim who worked at a Google India Site and was victimized, tortured, discriminated and forced to resign from his work on the basis of just being who he is, a ‘Kashmiri Muslim’.

The story gets more haunting and terrifying after his forced resignation, when he approached different Indian National Media to bring this case under limelight so that it may not happen again with anybody else. Not only did the national media turn him down, the alternate media also didn’t pay any heed to his suffering even when he had all the proof of what he had gone through.

Below is the email, untouched and unedited, that he has sent to numerous media organizations but to no benefit. Read on:

This is to bring to your attention a ‘matter’ that has victimized me as a vendor employee of Google India hired by Google’s valued Ad-words partners in India (Serco Global Services) to provide services to Google Ad-words customers at Google’s data centre in Gurgaon, Haryana, India.

I have tried several other ways to address the problem that I faced as a Kashmiri Muslim with Google and a company named Serco Global Services that works with Google India. I am writing to you after exhausting all other means to bring to the attention of the authorities certain malpractices and racist/anti-Kashmiri-Muslim behavior that I faced at Google Rolta Towers, Gurgaon,india.

During those 18 months, I performed as a high achiever for which I was duly awarded, granted appraisals and bonuses. It is safe to say that I was groomed to work in particular ways as my seniors at the office directed and advised me from time to time.

It is important to mention that I come from the conflict-ridden region of Kashmir. I was discriminated against on the basis of my identity as a Muslim and Kashmiri which I had brought to the attention of seniors at various times. I was often provoked by middle management and a few co-workers to discuss the politically volatile nature of my state which I always avoided.

One such incident occurred in September 2014 when my Avaya was plastered with a note ‘Hindustan zindabad’ (long live India) as a way to single me out and question my integrity in racial/religious terms. I brought this matter to the attention of my Google reporting manager, Mr. Gaurav Jain but to no avail. Instead, it led to further ridicule.

Following this incident, when Google denied help, another incident happened at the office (Google Rolta). I was handed a direct third level performance based warning letter (which I was not responsible for). The evaluation date was January 25, 2015 while the audit date was January 26, 2015.

Anyone familiar with the public holiday system in India would know that in the year 2015, January 25 fell on a Sunday and January 26 was India’s Republic Day. No offices are open or operational on these days in India. I was handed a warning letter on behalf of Google India at Google Rolta in a room booked by Google ETO after what could be a complaint from Google India and was informed it was a ‘gift’ for me on Republic Day.

Google ETO’s divisional manager Mr. Thomas Brat came for a three-day professional visit to Google Rolta (my place of work). On the last day of Mr. Brat’s visit, the whole team was gathered in the conference room for an interactive session. Gaurav Jain invited everyone except me but I wanted to introduce myself to Mr. Brat so I tried to enter the room. Another Google ETO manager Vishal vaid tried to stop me and told me that you will pelt stones at Thomas, that’s why you will not enter the room.

I was often taunted with being told: “if you don’t say Hindustan zindabad (‘long live India’), your sale won’t be updated” The call quality managar Harsh Garg often used abusive language against me. He along with my team leader and assistant manger often called me names. Especially On Fridays they often used to come to me and ask in a very rude way: “What’s in the bag, what’s in the bag”. When Google security used to check my bag, then why they repeatedly asked these insulting questions?

Gaurav Jain had problems with my wearing a khan shalwar as well. He told me not to wear it. I am not sure why my style of dress bothered him so much?

I ignored these incidents but this psychological torture affected my mental health to a great extent. It was quite evident to me that Google India and its Ad-words partners in India (Serco) were looking for excuses to get me out of the company as they often used to tell me that “it’s better for you to look for a job in your own country”. I still kept working. I made a good contribution to the business since I was a top performer.

in July 2015, I was told that the higher authority of Google has complained about my action of contacting and acquiring an account which I was instructed to do by my team-leader and later I was threatened to hand in my resignation along with a written confession that I had engaged in an illegal practice (which was not only encouraged but rewarded apriori)? was further forced to write that ‘my intentions to acquire an account were based on my personal greed and Google India and serco bpo had no involvement in it’. When I rejected to do so, I was threatened, harassed and cornered and my Google access card was forcibly taken from me and I was told to leave google premises. I left and soon after realized Google Mountain-view California erased my employee details from google’s intranet,11 days(approx.) prior to my resignation under duress with their partners in india at google rolta towers gurgaon without affording me an opportunity of being heard. Furthermore, my dues were not paid in full, I have been black listed in Google and my career is wrecked.

In November 2015, I served Google India and Serco Global Services with legal notice from Kashmir regarding the way I was forced to resign which they did not respond. After that I raised the issues (discriminatory practices and unfair expulsion) with Google leadership in California who assured me that they would have a close look at my case and followed the appropriate protocol by transferring my case to my concerned department at Google Singapore. It was only after this that Google India and Serco replied to my legal notice in a very threatening and diplomatic manner with half-baked truths and falsified facts. The on-going email conversation with Google Singapore was also not fruitful as they too chose to side Google India’s response by washing its hands off the issue and told me to contact Serco regarding the discriminatory practices at Google India’s office?

I replied back to the contents of notice to Google Mountain-view California via email, and told them that I did not want a legal battle but wanted Google-plex to investigate my case properly. However, they didn’t honor my request to investigate the matter further and refused to elaborate. They again transferred me to Google Singapore. Google Singapore says: “we don’t intend to respond further; however we reserve the right to respond to any subsequent legal proceedings.” Thus they left me with the only choice to seek legal redress and access any competent forum for help.

It has been more than 1.5 years since I contacted various media outlets and human rights law firms for help but unfortunately I have got no response. I contacted all the leading newspapers and magazines but have not received any positive response from that quarter either. They listen to my story but after that they go silent without even bothering to investigating what I have said.

It seems this kind of discrimination against religious minorities is routine in India, hence it receives little or no attention from any quarters.

The screen shots of a few of the mails that Zahid has sent to different people has been attached as Proof. 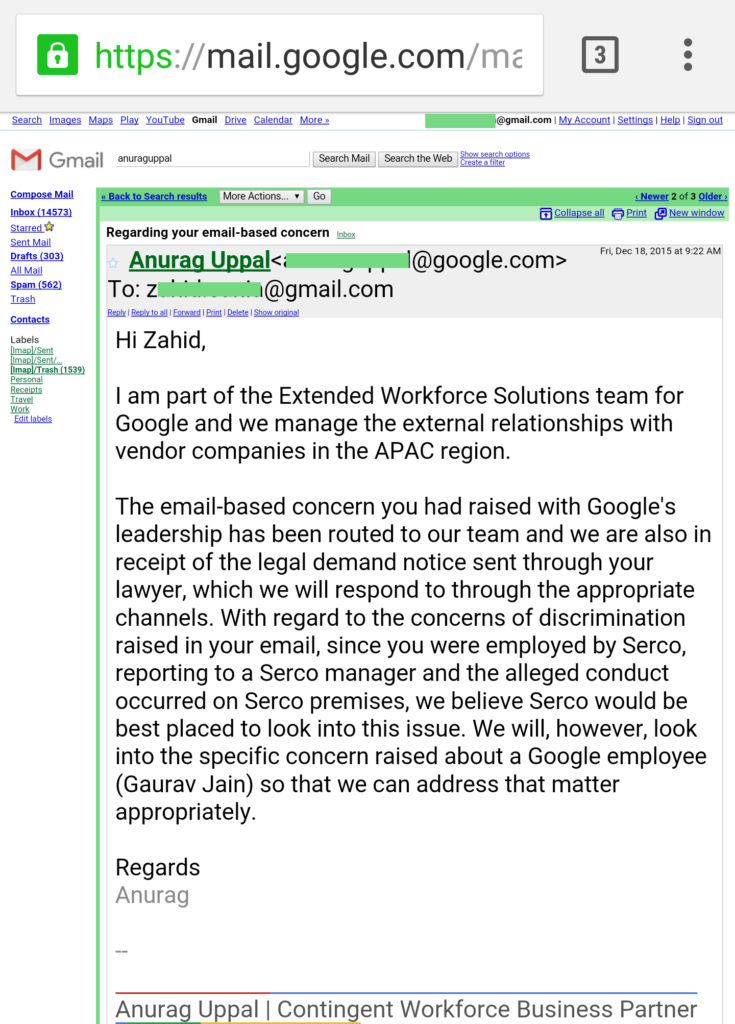 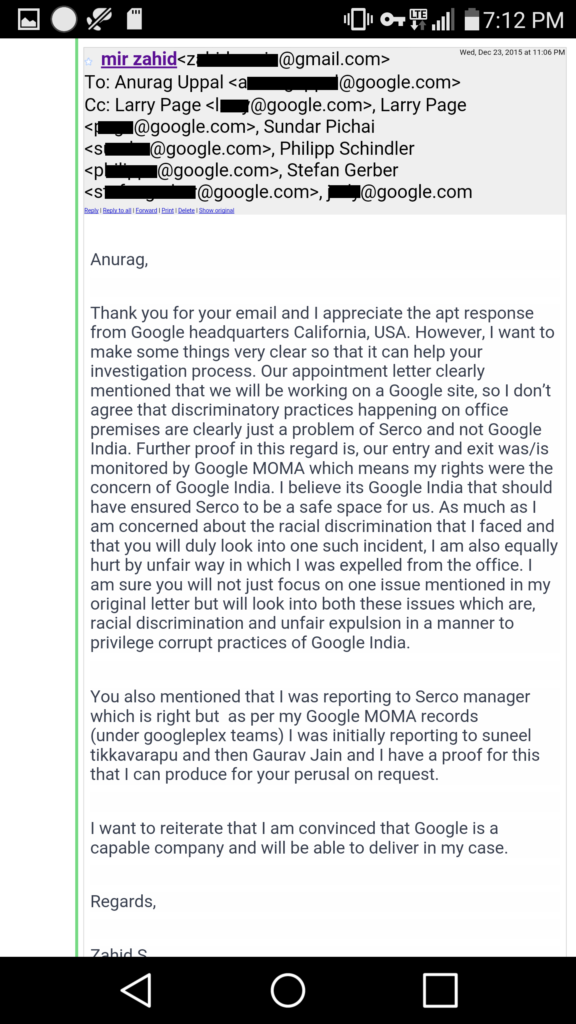 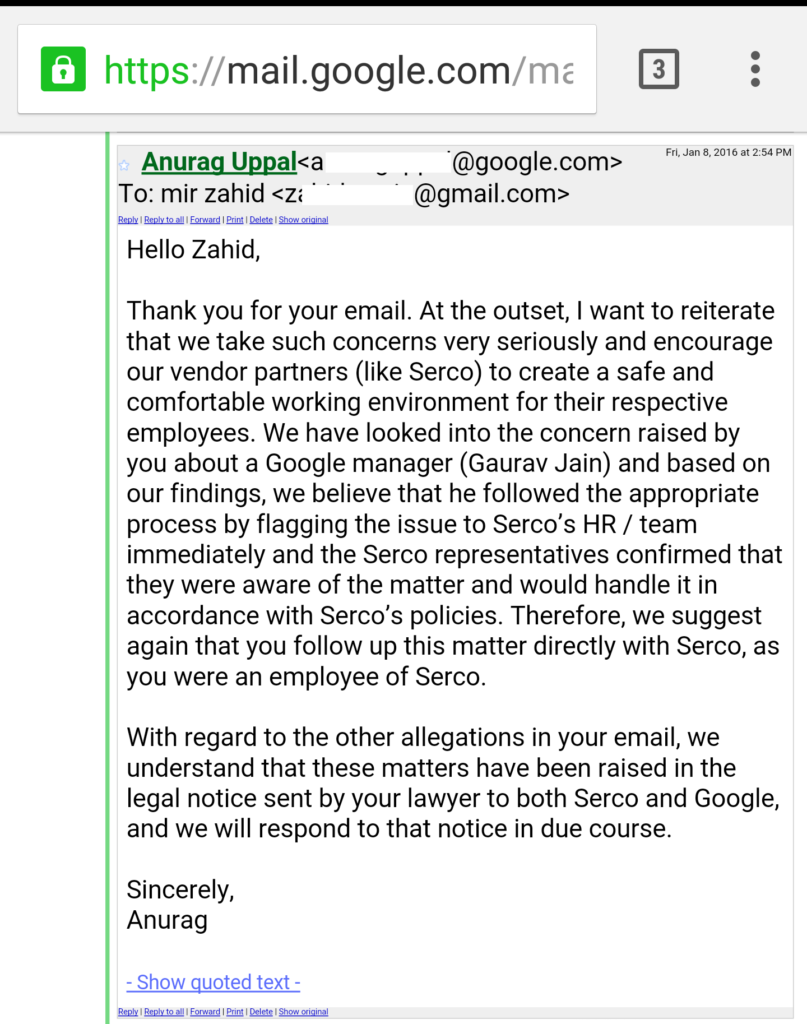 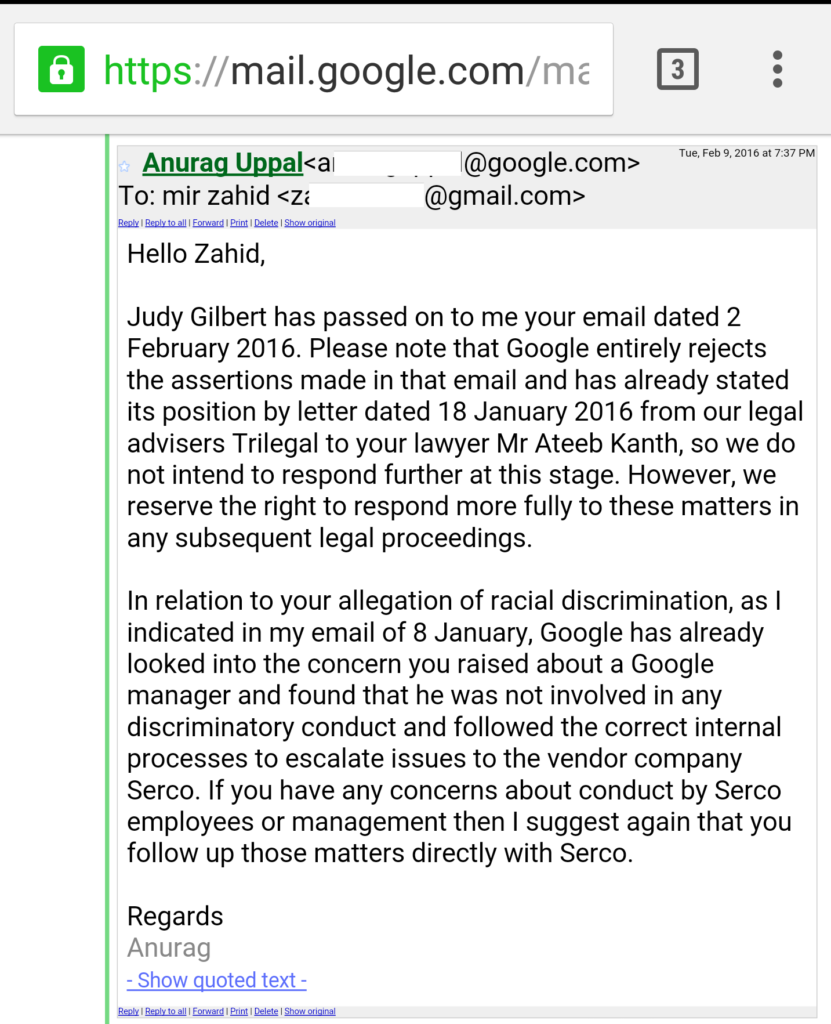 Google India has not yet been contacted for their say in this case.

This is an Op-Ed.

Students falling short of attendance not allowed to sit in exams: Education Minister