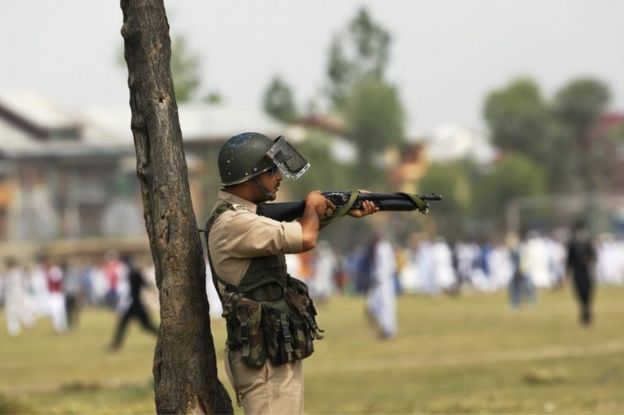 The CRPF has informed Jammu and Kashmir High Court that if pellet guns are banned as a crowd control measure, its personnel will be forced to fire bullets in extreme situations, which can cause more fatalities.

“In case, this (pellet gun) is withdrawn from the options available with the CRPF, CRPF personnel would have no recourse in extreme situations but to open fire with rifles, which may cause more fatalities,” the CRPF said in an affidavit submitted to the High Court on Wednesday.

The paramilitary force submitted the affidavit in response to a PIL filed before the court, seeking ban on use of pellet guns as a means for crowd control mechanism in the Valley, which has been rocked by violent protests since the killing of Hizbul Mujahideen commander Burhan Wani in an encounter with security forces on July 8.

The force said pellet guns were introduced in 2010 and were an accepted weapon of riot control. It said that following the standard operating procedures while dealing with a dynamic law and order problem is difficult in case of moving, bending and running target. The SOP regarding use of firearms for crowd control in extreme situations requires that the weapon be aimed below the waist.

“But the situation prevailing on the streets during an ongoing law and order incident is dynamic and mobile. “In such a situation, sometimes it is difficult to go in for precise aimed fire at a moving, bending and running target,” it said.

The CRPF said it has fired around 3,500 pellet cartridges from July 9 to August 11 during violence by protesters in the Valley. The PIL was filed by Kashmir High Court Bar Association on July 30.

While the CRPF and BSF have submitted their replies, the state government has not filed its response so far. The case is listed for hearing tomorrow again. (PTI)