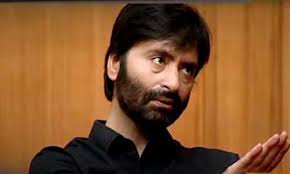 JKLF chairman who is in jail since July 8, in  a statement said that unwavering faith in Allah Almighty, strong unity and unrelenting resistance are the tools needed to overcome the forces of oppression and tyranny and these tools will surely take us to our desired goal of free Kashmir.

He said that struggle for freedom asks for sacrifices and this journey is always a long tedious journey but the nations which decide to fight the forces of darkness and oppression tread this thorny path and finally reach to their desired goal.

Malik said that from last 34 days, Kashmir is burning, our 60 innocents have fallen to the bullets of trigger happy Indians, more than 6000 men, women and children are injured among whom hundreds have lost their eyesight and other vital organs.

“Our houses, vehicles, business establishments are being vandalized by Indian forces, pellets and pepper-gas are being used at will and even women and children are not being spared. Medical, paramedical staff and ambulances have become primary target of forces,” he said.

He said that police and forces at the behest of so-called rulers have speeded up callous and undemocratic means like night curfews, nocturnal raids, spree of arrests and other oppressive measures to overpower peoples will and instead of putting an end to the atrocities against people and listening to their just voice, Indian leaders and their Kashmiri stooges seem stagnant with their state of denial policy.

Appealing Kashmiris to stand united and follow the protest programs given by the united resistance leadership, Yasin Malik said that at a time when oppressors are trying hard to break our unity and resolve we need to shun our petty differences, stand firmly united and resist tyrants with oneness and passion.

He said that Kashmir and Kashmiris are passing through hard times but our history bears a witness to the fact that we as a nation have always endured hardships with unity and zeal. Our passion for brotherhood, philanthropy and social works has always been at high during hard times and everything done in this regard by our youth and elders during past 34 days bear a witness to this fact.

While recalling his sacrifices and struggle, JKLF chairman said that Sheikh Sahib was a humble soul and dedicated resistance lover who always stood in the front row and sacrificed his life for the just cause. While terming the sad demise of veteran religious scholar Alama Muhammad Ashraf Andrabi as a great loss to Kashmiri nation, JKLF chairman said that Moulana was a great scholar, humble religious leader and brave soul whose demise has created void that cannot be fulfilled easily.