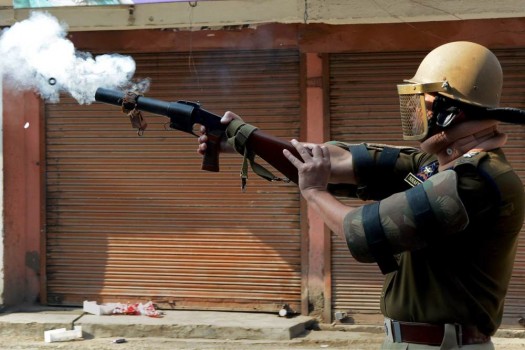 Shocked over deliberate teargas shelling on hospitals, Doctors Association Kashmir (DAK) today said that these are acts of utmost savagery.
In a statement issued to KNS, while condemning these barbaric attacks on medical facilities in emergency situation, President DAK Dr Nisar ul Hassan said these attacks disrupt the delivery of medical services and endanger care providers at a time when they are needed most.
Attacks on medical facilities are not only blatant violation of international humanitarian law but they deprive injured persons of urgently needed medical care.
These systematic attacks on crucial life-saving assets, at this point of time are putting the lives of sick and wounded at serious risk.
There can be no justification for targeting medical facilities at any time.
Yesterday, teargas shells were fired by security forces on people who had assembled in SMHS hospital to offer funeral prayers of a deceased which worsened the condition of admitted patients and made the working of doctors difficult. In another incident, forces resorted to aerial firing and fired tear gas shells inside trauma hospital of Kangan.

In Chadoora, forces barged into hospital and beat staff and vandalized the hospital property. Last month, forces had resorted to similar shelling inside the premises of SMHS hospital. These repeated attacks on vital lifelines leave patients no choice but to flee. There is no excuse for deliberately targeting hospital after hospital. The latest string of attacks on medical facilities appears to be part of a pattern to target medics and hospitals. It appears to have become a new norm.