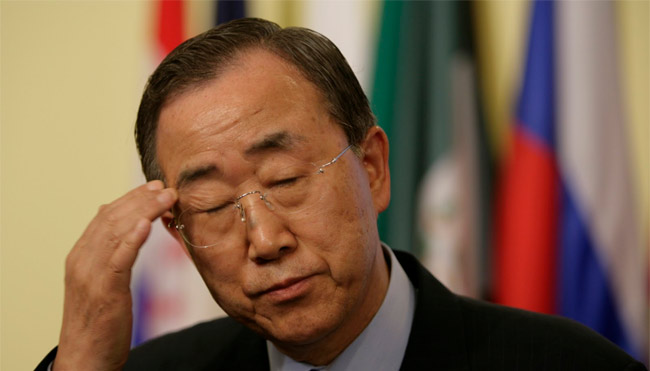 United Nations: The UN has strongly rejected assertion that Secretary General Ban Ki-moon has a “vow of silence” on the issue of Kashmir. “It’s not a vow of silence. We did say something, but that’s where we stand on it right now,” Ban’s deputy spokesman Farhan Haq told reporters at the daily press briefing yesterday when asked when the UN Chief will “break his vow of silence” and speak about Kashmir.

Haq said Ban’s stance on the Kashmir issue remains the same and cited a statement that had been issued a few weeks ago on the crisis in the Valley. Ban had said he is closely following the recent clashes in Kashmir, that had broke out in the aftermath of the killing of Hizbul commander Burhan Wani. He had called on all parties to “exercise maximum restraint” to avoid further violence and hoped that all concerns would be addressed through “peaceful means”.

Earlier this week, Ban’s spokesman Stéphane Dujarric had rejected remarks that the Secretary General was reluctant on the issue of Kashmir. Dujarric was asked at the daily press briefing why the Secretary General did not initiate efforts to settle the Kashmir conflict, even as the world body is trying to resolve conflicts in Cyprus and the Middle East. “I will leave it to you and others to analyse the reasoning. I think the questions on the situation in Kashmir have come up with us today and previously. Our answers to those questions remain the same,” Dujarric had said.

When asked why there is “reluctance” on the part of the Secretary-General and the United Nations to offer any comments on the situation in Kashmir, Dujarric said when questions arise on the issue, the UN offers comments. “So I don’t agree as being reluctant,” he had said. Protests broke out across Kashmir Valley on July 9, a day after Wani was killed in an encounter with Indian security forces, leading to clashes in which 64 people have been killed.

Didn't go to Pakistan to have lunch, says miffed Rajnath