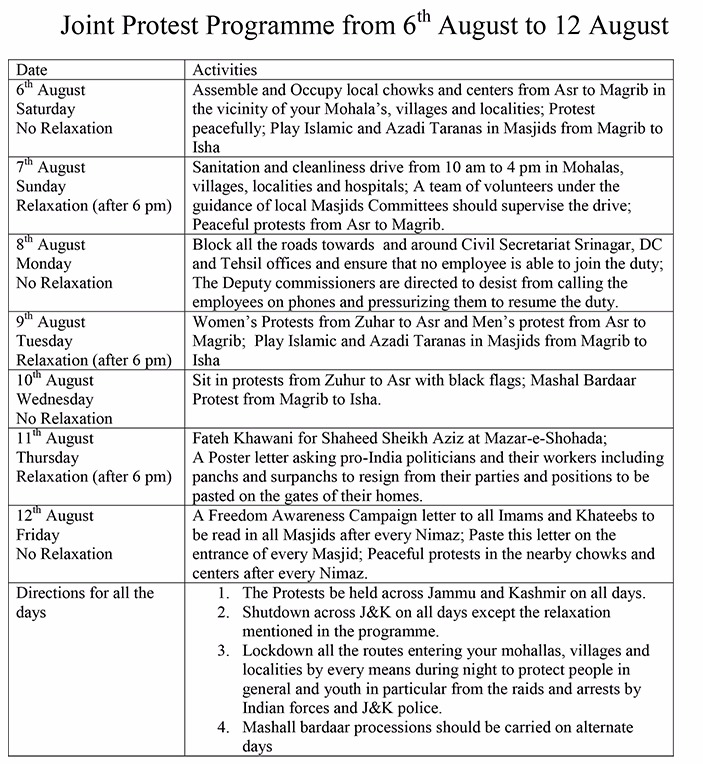 6th August
Saturday
No Relaxation
Assemble and Occupy local chowks and centers from Asr to Magrib in the vicinity of your Mohala’s, villages and localities; Protest peacefully; Play Islamic and Azadi Taranas in Masjids from Magrib to Isha

7th August
Sunday
Relaxation (after 6 pm)
Sanitation and cleanliness drive from 10 am to 4 pm in Mohalas, villages, localities and hospitals; A team of volunteers under the guidance of local Masjids Committees should supervise the drive;
Peaceful protests from Asr to Magrib.

8th August
Monday
No Relaxation
Block all the roads towards and around Civil Secretariat Srinagar, DC and Tehsil offices and ensure that no employee is able to join the duty; The Deputy commissioners are directed to desist from calling the employees on phones and pressurizing them to resume the duty.

9th August
Tuesday
Relaxation (after 6 pm)
Women’s Protests from Zuhar to Asr and Men’s protest from Asr to Magrib; Play Islamic and Azadi Taranas in Masjids from Magrib to Isha

10th August
Wednesday
No Relaxation
Sit in protests from Zuhur to Asr with black flags; Mashal Bardaar Protest from Magrib to Isha.

11th August
Thursday
Relaxation (after 6 pm)
Ijtimayiee Fateh Khawani for Shaheed Sheikh Abdul Aziz at Mazar-e-Shohada Srinagar;
A Poster letter asking pro-India politicians and their workers including panchs and surpanchs to resign from their parties and positions to be pasted on the gates of their homes.

12th August
Friday
No Relaxation
A Freedom Awareness Campaign letter to all Imams and Khateebs to be read in all Masjids after every Nimaz; Paste this letter on the entrance of every Masjid; Peaceful protests in the nearby chowks and centers after every Nimaz.

Directions for all the days
1. The Protests be held across Jammu and Kashmir on all days.
2. Shutdown across J&K on all days except the relaxation mentioned in the programme.
3. Lockdown all the routes entering your mohallas, villages and localities by every means during night to protect people in general and youth in particular from the raids and arrests by Indian forces and J&K police.
4. Mashall bardaar processions should be carried on alternate days