Bike and Car Rallies on move to Shopian 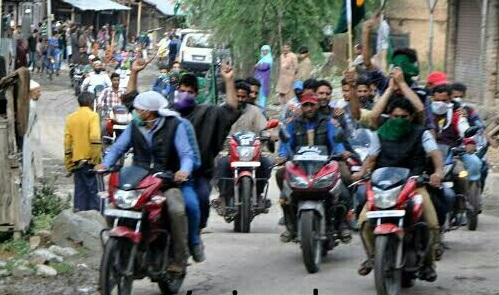 As Kashmir is witnessing complete shutdown on day 24th of current mass uprising, a rally of people is on way to South Kashmir’s Shopian on Monday.

Locals said that hundreds of cars and bikes from different areas are on way to main Shopian town.

Thousands of people are raising pro-freedom slogans while almost all cars and bikes have green flags installed on them.

At least 61 civilians have been killed by forces since July 09, 2016 while thousands have been injured and are recuperating in hospitals and in their homes.

The mass rallies have become a norm now in South Kashmir where people raise anti-India slogans. People are showing unity in the protest demonstrations while youths have shown extreme defiance yet.