Legislator Warns of Hitting the Roads with People

National Conference legislator Shamima Firdous Friday warned the government that she will mobilize people from length and breadth of her constituency and will hit to roads if authorities fail to curb the ‘unbridled’ Para-military Central Reserve Police Force who according to her have made it a habit to target innocent civilians and women during the dead of the night without any provocation. 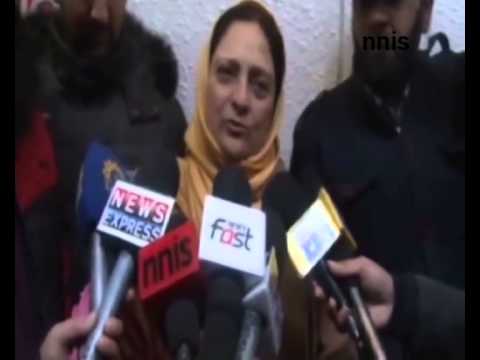 People from Habakadal locality of Kashmir capital Srinagar have been accusing CRPF of ‘letting loose a reign of terror’ during night hours. On Thursday night  the locals hit to roads and staged a massive anti-India protest after CRPF men allegedly barged into a local mosque and houses, caused damage to property and beat up inmates including women. The locals from Eidgah and Noor Bagh areas also leveled similar allegations against CRPF.

The two time legislator told news agency CNS that, “unbridled CRPF on Thursday night barged into the houses at Chandapora, Gadood Bagh and other areas of her constituency and thrashed inmates including women and children. The area was peaceful when CRPF men resorted to such illegal means to terrorize the local population.”

Demanding the immediate removal of CRPF bunker from Habakadal area, Shamima Firdous said that instead of taking on stone-pelters these troopers target innocent civilians mostly elderly men, women and children. “They fire tear-smoke shells, pepper gas and pellets into the residential house. This is the height of repression and suppression and if these troopers are not curbed and stopped, I will myself lead the protest,” she said.

While expressing anguish over the use of extra and unnecessary use of force on local population, Shamima Firdous said that despite bringing the matter into the notice of top civil and police authorities, the CRPF continue to act at will and target innocent civilians. “Which law permits them to forcibly enter into mosques and houses during the dead of night and beat up women and children. If this continues, I will ask my people to assemble on the roads and stage indefinite protests,” Shamima Firdous said.

Armed forces retreated from Palhalan after people chased them away

European Union Expresses Grief, Stands for the Safety and Security of Kashmiri People