When A Pakistani Hindu Visited India; Its Not about the Religion, Its about the Nation 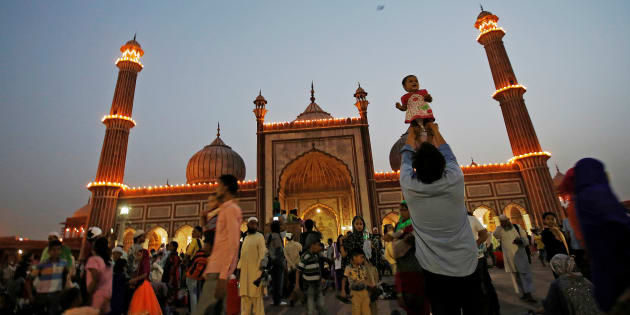 On a hot summer afternoon in Delhi, my Pakistani Hindu friend was visiting the Jama Masjid. After all, he had come to tour Delhi. In the evening, we met in a restaurant in Connaught Place.

He was staying with a relative in Mehrauli, where the (Indian, Hindu) neighbour told him not to cross the road. “Muslims live there,” the neighbour warned. That was funny, because our visitor lived in Pakistan, where no roads could be crossed without meeting Muslims.

The Pakistani Hindu, member of a religious minority in his country, was visiting Hindu-majority India for the first time. He had come on a pilgrimage visa, but tourism is a kind of pilgrimage itself. Like most Pakistanis, like most tourists, he wanted to see as much of India as he could.

I wondered what everyone was asking him. What is it like being a Hindu in Pakistan? “In what sense?” he said. He seemed a bit dazed. It was only his second day in a foreign country that wasn’t quite foreign.

“In the Jama Masjid area, I felt Indian Muslims were very poor,” he replied. He also couldn’t get over the shock of an Indian Hindu telling him not to go to the part of Mehrauli where Muslims lived.

“It’s not so bad in Pakistan,” he said. “Hindus are not persecuted the way you may think. We don’t have it as bad as the Christians, Ahmadiyyas or even Shias these days.”

In his head he was still processing the comparison of Pakistani Hindus with Indian Muslims. The two images – of discrimination in Mehrauli and economic status in Jama Masjid – bore heavy on his mind.

“We Pakistani Hindus are better off than Indian Muslims,” he insisted, as I listened with scepticism. “We just face two problems in Karachi.”

What are these problems?

“Muslims don’t rent out their houses to us easily, and often we lie and pretend to have Muslim names to avoid unnecessary attention.”

I almost fell off my chair laughing. “It’s the same with Indian Muslims! Just Google and see reports of housing discrimination,” I told him. I also told him how sad I felt when the air-conditioning repair mechanic who came to my house the other day lied when I asked him his name. He claimed to be Satya when his name was Nadeem. When his junior addressed him as Nadeem, he pretended nothing happened. Satya, the truth, is what it is.

My Pakistani friend listened with his eyes popping out. How could the discrimination of Muslims in India, and their ways of managing it, be so similar to that of Pakistani Hindus?

When you get lost in a hall of mirrors, you don’t cry. You laugh at your helplessness. The two of us laughed over the India-Pakistan hall of mirrors. We were both Hindu, but we were shaped more by history and geography than religion.

He ordered a vegetarian meal, I ordered a chicken dish. It was difficult being vegetarian in Pakistan, but he managed just fine.

I was still not satisfied by his claim that all was well with Hindus in Pakistan. Why do so many of them migrate to India? I told him of my own experience once of doing a story on Pakistani Hindu migrants in a corner of Chhatarpur, not far from where he was staying in Mehrauli.

He ordered a vegetarian meal, I ordered a chicken dish. It was difficult being vegetarian in Pakistan, but he managed just fine.

I had met a disabled man from a Sindh village who had come with an army of children. “No family planning in Pakistan,” he told me. He had saved up for years just to be able to afford the passport fees. He complained how his children were forced to study in madrassas and how his daughters faced sexual harassment from Muslim landlords.

My friend was a well-to-do Karachiite – “upper middle class” – and he seemed to be speaking from his own experience. Yet, even educated middle class Hindus – such as his relative in Mehrauli – choose to become refugees in India. They do so even though it takes them years to get Indian citizenship.

“Look, my life is in Karachi. I cannot imagine moving anywhere. But many Karachites have been moving abroad for some years due to the security situation and lack of jobs. Rich Muslims and even rich Hindus have moved to Europe and North America. Similarly, many Hindus find it easy to move to India,” he explained. “But the security in Karachi has become a lot better now thanks to the Pakistani Army. They are flushing out all the bad elements.”

I was going to fall off the chair again, expecting him to say, “Thank You Raheel Sharif”, but I wanted to hear him out. What about the rapes and forced conversion of Hindu women in Sindh villages? Did you know, I asked him, there was a protest in India Gate for Rinkle Kumari when she was abducted? I later took him to India Gate.

“See, there are many cases where the Hindu woman falls in love with a Muslim and then, no doubt, marriage is not possible without conversion. For every case of forced conversion, there are nine that are voluntary,” he said. Rinkle Kumari’s, he claimed, was one such case. “Her uncle is a Hindu rights activist and was obviously not happy with the marriage, so he managed to kick up a storm,” my friend claimed.

“The only problem is that it’s the Hindu who has to always convert. Even if a Muslim woman falls in love with a Hindu man, it is the Hindu man who will have to convert otherwise marriage is legally and constitutionally not possible in Pakistan.”

Muslim serfs in a feudal Pakistan also face similar problems of sexual harassment and rape, bonded labour or denial of land rights and caste discrimination, he said. This is also true, perhaps to a lesser extent, in parts of rural India, I replied. “The poor Muslim haaris, as they are called in Sindh, have nowhere to go. At least the Hindus manage to come to India.”

We did go on to have a heated discussion on democracy in Pakistan. “If Hindus survive in the country, it is because of the Pakistani Army,” he said.

He couldn’t be more Pakistani.

CRPF to continue The Use of Pellet Guns in Kashmir