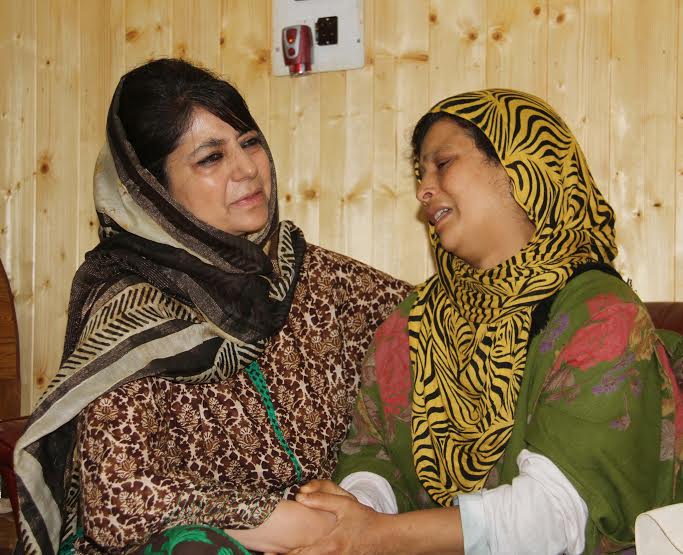 Chief Minister, Ms Mehbooba Mufti Saturday visited this border town to offer personal condolences to the families whose near and dear ones were killed, in various circumstances, during the prevailing law and order situation.

“I am pained to see that all these victim families belong to the poorest of the poor sections of the society,” the Chief Minister said while expressing deep grief and anguish over the loss of precious human lives and injuries in the law and order situation prevailing in Kashmir since July 8.

She met the affected families here and assured all possible support to them, an official spokesperson said this evening.

Seeking public cooperation in restoration of normalcy and peace to prevent further loss of lives, Ms Mehbooba appealed the youth, their parents and their families to help the Government in restoring peace so that the miseries of the people can go away.

“Violence has only brought destruction to our state and left behind a trail of tragedies in the shape of hundreds of orphans, destitute and widows who are living a miserable life because of the lack of any institutionalized support,” she said and added that the elements who are glorifying these killings and playing politics over the graves of these poor youth, never bother to look back at the plight of the victim families once the things settle down.

Ms Mehbooba said it has always been seen that many internal and external forces gang up to destabilize Kashmir once there is some semblance of normalcy in the Valley.

“Whenever the economic activity starts picking up in Kashmir with the encouraging increase in tourist arrivals as had happened this year, several quarters with vested interest in Kashmir turmoil seem to have ganged up to orchestrate another spate of deadly violence and push the people towards further economic deprivation,” she said and added that violence hits every aspect of the local economy with tourism and education being the main targets.

“There are reports that another round of educational migration has already started from the Valley with many affluent families preferring educational institutions outside Kashmir for their wards,” the Chief Minister said and added that the people have to ponder over what’s going on and who is getting hurt the most because of such situations.

“If there is peace, there will be development, tourism, employment and people will lead a happy and prosperous life. And if God forbid, there is no peace, it is only our people who would be the worst sufferers,” she said and added that it is especially the poorest of the poor who suffer the most in such situations.

Hailing various sections of the society for reaching out to the needy amid prevailing painful situation, the Chief Minister especially commended the dedication and the commitment of the doctors, the paramedical staff, the nurses, the ambulance drivers, the community relief organizations and individuals who put in their best efforts to help the people affected by the violence.

“I salute such citizens who reached out to the needy amid trying circumstances,” she said.

The Chief Minister was accompanied by Minister for Social Welfare, Sajad Gani Lone. Minister for Rural Development, Abdul Haq Khan, Member Parliament, Fayaz Ahmad Mir and MLA Kupwara, Bashir Ahmad Dar who are camping in the district for the past several days were also present, the official spokesperson said this evening. District Development Commissioner Kupwara, Kumar Rajeev Ranjan and other officers of the district administration were also present.

Grenade attack on PCR, No loss of life or injury reported

An appeal from Director SKIMS Soura