​CRPF trooper inserts needle in the eye of 5-yr-old

​CRPF trooper inserts needle in eye of 5-yr-old, says family
Srinagar: The sadistic, malicious injury inflicted on a 5-year-old boy by a CRPF soldier has convinced many in the SMHS hospital, where the child is admitted, that India has adopted the “Israeli policy” of “systematic genocide” and “disabling of every Kashmiri”. 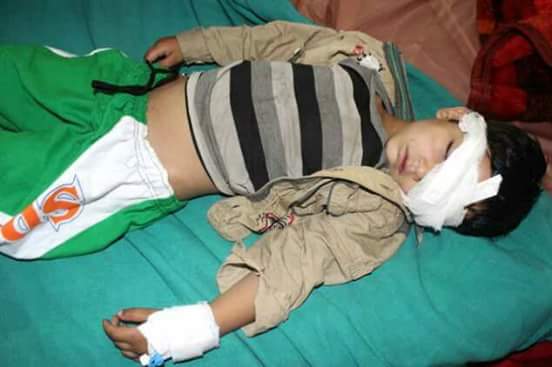 The little boy, Nasir, occupies Bed number 26 at SMHS hospital. Every now and then he wakes up terrified and seems to be trying to free himself from shackles. Finally he ends up clinging to his father.

“Whenever he wakes up, he is panic stricken. He yells ‘army ha aayi, army ha aayi! Yim ha layan mea! (Army has come, army has come, to beat me),” says his father Mohammad Altaf, a resident of Kokernag.

Nasir Ahmad, five years old, was returning home with his father and grandmother from Anantnag, where they had gone to buy medicines for the child’s eye-infection and for the ailing grandmother. Altaf said that on their way back they came across protests taking place at Sherpora. Altaf sought shelter for his mother, and while he looked for it he told his son to stay put in an alley. “I rushed my old mother to a relatively safer place and asked Nasir to sit in one place until I return. I feared he might be hurt while I was moving around with my mother in that chaos,” Altaf said.

When he returned, he couldn’t believe his eyes. His son was lying on the ground and rubbing his eyes. He was sobbing in pain. “He was literally biting the dust due to the pain. His eyes were burning like charcoal. There was blood all over his eye,” recalled Altaf.

Nasir was rushed to a nearby Islamabad hospital from where he was referred to SMHS. It was here that he revealed what had happened. “At the hospital he told the doctor that a CRPF man had first inserted sand into his eye, and then injected a needle into the eye. After that he slapped him. There were slap marks on his face,” Altaf said.

Altaf, 28, is a father of three children. He said he was worried about how he will face his wife, who does not know that her son has suffered an injury that can damage his eyesight. “I don’t know how I will face my wife as my 5-year-old son was absolutely all right when I left my village,” Altaf said, tears rolling down his face.

Altaf is also concerned about the eyesight of his child. “Doctors have already operated on his eye, and they are going to operate again, as he has shown no signs of improvement,” Altaf rued.

As Altaf was narrating the episode, people from the nearby beds and other sections had come to listen with growing horror. 34-year-old Shameema who was accompanying her pellet-injured brother, said that she had children as young as Nasir, and that seeing kids as young as five being targeted by government forces was beyond belief. “This is systematic genocide; they are targeting our children to finish our race,” she said.

A few men seconded her and called it a policy on the lines of Israel. “They are clearly employing the tactics of Israel, as this is what they do in Gaza: kill small children so that the entire race is finished,” said the group of men among which were volunteers working at the hospital.

“They are on a mission to disable every Kashmiri. It is clearly a ploy taken from Israel,” said an elderly man, Mohamad Amin.

Altaf said that many people at the hospital gave him solace and courage to not lose heart. “But you tell me, how can someone be strong when the apple of his eye is hurt? He is just five years of age. Who on earth hurts kids of his age?”

Nasir is the second 5-year-old kid has been at the receiving end of Indian brutality in the Burhan aftermath. Zohra, a 5-year-old girl of Qamarwari in Srinagar, was shot at with pellets by Indian forces, resulting in injuries to her body.

India feeling pressure from its own people: Radha Kumar