They Killed Her; The Worse was Yet to Follow

DH Pora (Kulgam): The killing of a young woman, Yasmeena Wani, in DH Pora area of Kulgam district on July 8 and its aftermath is an example of the many battles that are being fought simultaneously in the valley. The biggest of these struggles is the struggle of truth, curfewed and gagged, against the state propaganda, unrestricted and relentless.

For the state and some of its unsolicited extensions, the majority of Indian news channels, Yasmeena is the victim of ‘mob frenzy’, meaning she became the victim of ‘defensive’ police firing meant to fend off a big crowd that attacked and set ablaze the DH Pora police station on July 8, a day after Burhan Wani was killed. But even for DH Pora, which its residents say has been tempered over the years by the lavish love for frenzied voting, the state version of how Yasmeena died is obscene.

On the morning of July 8, pro-Burhan protest had erupted outside Yasmeena’s home, which is situated on the roadside. Her younger brother, Moeen, a frail class 7 student, had gone outside, probably to take part in the pro-Burhan demonstration. Yasmeena, one of her younger sisters cousin Insha, a class 12 student, went out to look for Moeen. On the main road, they saw him trying to break free of the grip of a few policemen. The sisters and the cousin fought with the policemen and freed him. At the same time the forces charged at the protesters. The siblings and the cousin ran away into a lane, about 10 feet wide. According to Moeen, the moment they tried to run into a smaller lane, a volley of fire hit the shops and houses in the lane. (I counted four bullet marks on walls and shop shutters). Moeen and the other girls saw Yasmeena fall into an open drain sloping down the edge of lane. She had been hit in the head and had probably died on the spot. The trio took Yasmeena to the sub-district hospital on their shoulders. The hospital is more than 300 metres from the lane where she fell and the walk to the hospital building is a taxing climb up several steps of a concrete. 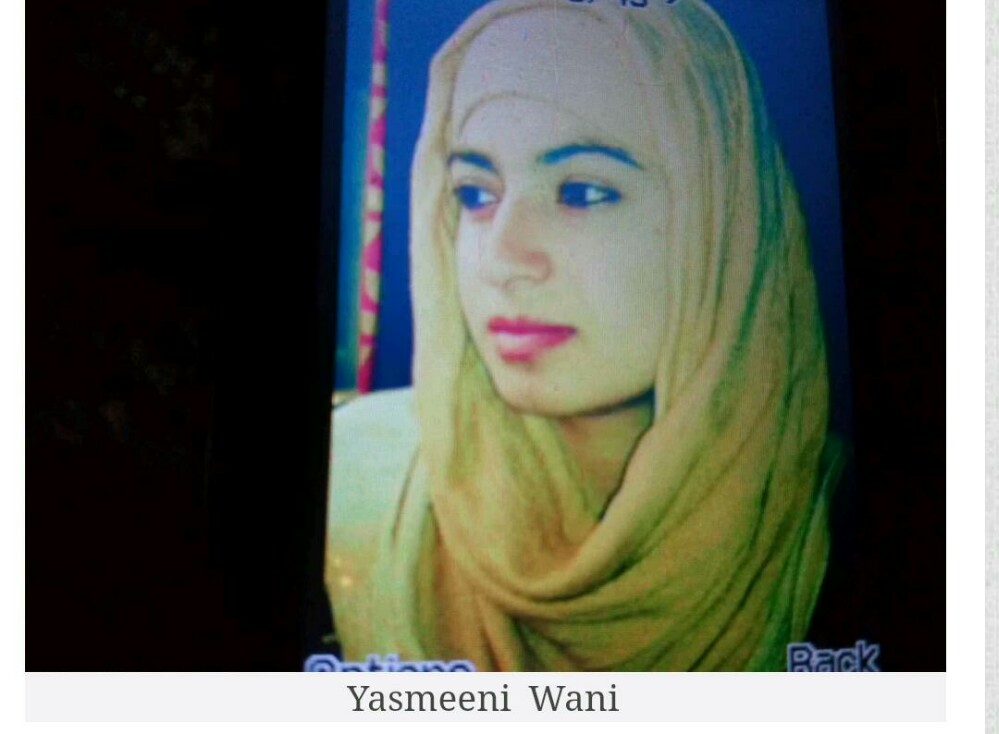 Doctors declared her dead on arrival. As the trio was descending the stairs, a group of policemen and soldiers tried to snatch the body. “I threw myself over the body and I told them I won’t leave my sister. They beat me up ruthlessly. In the meantime people came and managed to take her body. I regained consciousness at the Kulgam hospital. They beat me up so badly that people had told my family that I too might die,” Insha said. She was hospitalized for two days. “A soldier dragged me on the road and the SHO of the police station slapped me hard. The SHO said, ‘you are mad,’” said Insha. Yasmeena was killed at about 11.30am, the local residents said. After her funeral prayers, the number of protesters had swelled. At about 2pm, a large group of mourners attacked the police station, located right across the hospital, a sprawling complex of about five big and small buildings. More than a dozen vehicles in the terraced lawns of the station were also burnt. Among the burnt down objects is a box of charred grenades. Burnt remnants of a 20-rupee and two 100-rupee notes lie nearby. The government had said several rifles are missing from the armoury of the station. During the recent uprising, a few Indian channels, quoting anonymous intelligence sources, said ‘Pakistan-sponsored groups pay young boys Rs 500 for snatching a rifle and Rs 1000 for a grenade’. It was about Rs 7000 of burnt cash in the grenade box. Chief minister Mehbooba Mufti and government spokesman Naeem Akhtar had justified police brutality on the same lines: the protesters were attacking security installations and forcing the police and CRPF to open fire. 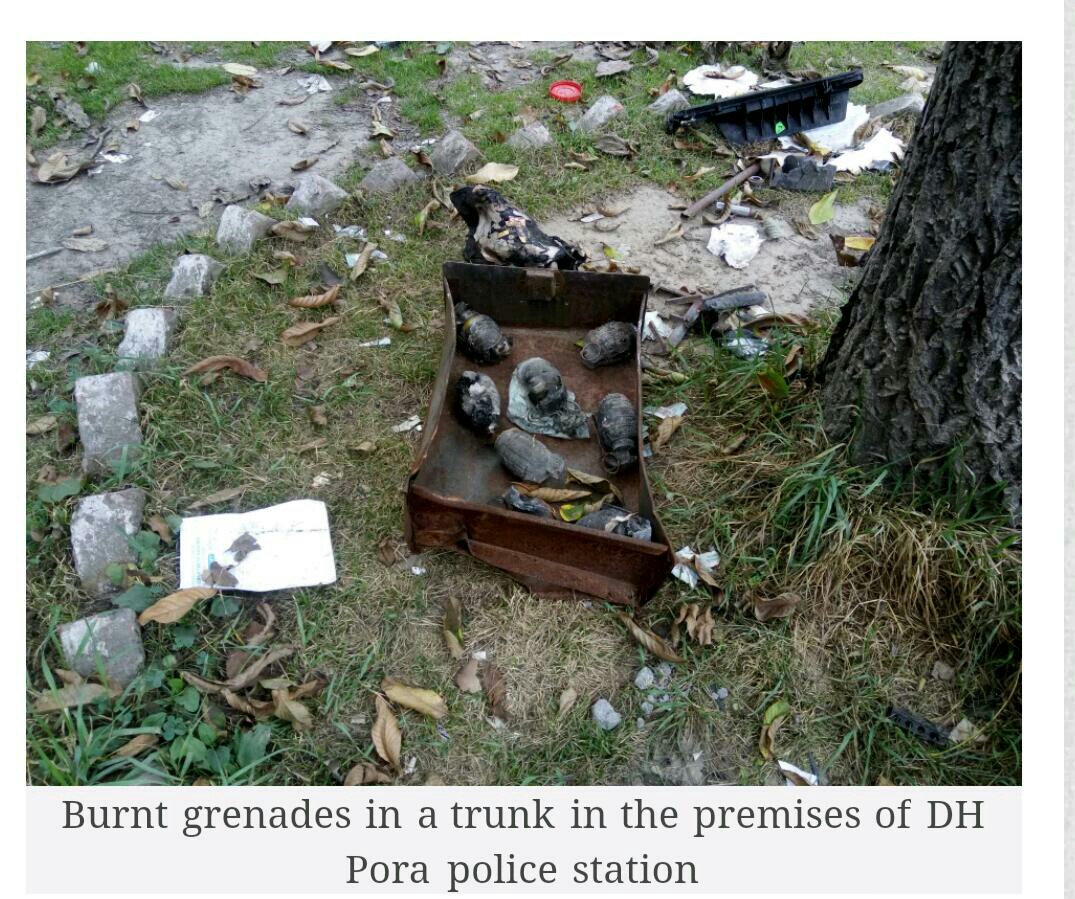 Anybody interested in investigating the police/state theory on the police station attack, the local residents say, should come and see for himself where Yasmeena was killed and where the police station is located. “The policemen had disappeared when we attacked it. They were aware of their crime. It was a targeted killing,” said a man who had come to Yasmeena’s home to offer condolences. “In the past 27 years you can say not a stitch of an injury has occurred in this place. We didn’t face any trouble from them (police and army) either but pro-Burhan protests were spontaneous and they killed this innocent girl,” he added. 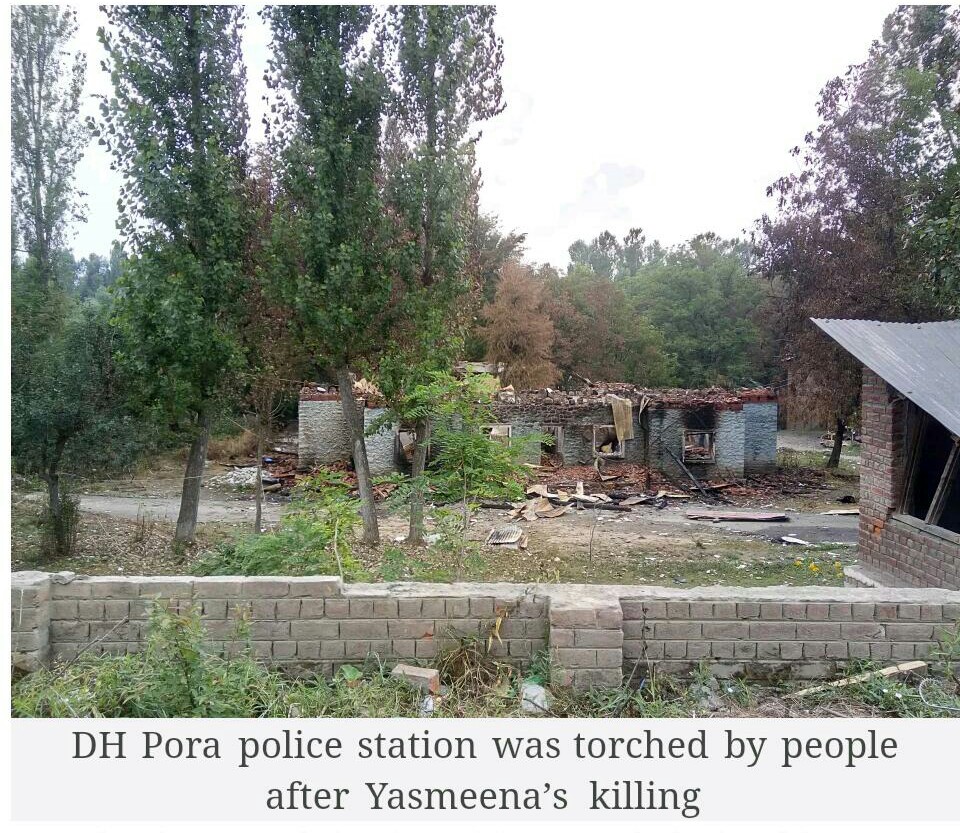 The girl, her mother Haleema says, was not “just any other girl”. A neighbor who was commiserating with Yasmeena’s father interrupted: “She was a manager. She funded her own education by doing Tila (goldthread work) and also contributed towards family expenses. Theirs is a poor family. She managed household affairs,” he said. Yasmeena, 20, had passed class 12 exams and was pursuing BA.

A group of people who assembled in the living room of the Wani family said what followed Yasmeena’s killing was equally worse. “When Moeen was coming to deliver the news of her death the forces caught him outside the gate of his home and beat him up again. The next day they threw stones at the mourning family and they had to go to a relative’s home which is a walking distance from here. The husband of Yasmeena’s cousin who had come visiting was hit in the head. He received three stitches,” they said. This reporter and a few other journalists were taken around the town and shown broken window panes. Breaking window panes is a milder form of collective punishment quite widespread these days in south Kashmir, the centre of the post-Burhan-killing uprising.

The towns people say that policemen abusing people from their speeding vehicles are now a daily ritual. Many people who had assembled at the Wani house indulged in self-deprecation, saying the more rebellious neighbouring villages called them “daand”, bulls, because of their penchant for participating in elections in huge numbers. Some say the poll frenzy might happen again but it might never be the same. Many doubt it and raise their voice a few notches, stating, “be assured they would vote again”. But some swear they will never vote again.

“Ask these people who voted where are those they voted for. All of them have gone into hiding. Are those people doing anything to save you from daily oppression?” says a young man. The gloom in the living Wani family living room is accentuated by its darkness. The mother breaks into sobs intermittently. So does an aunt who came late and couldn’t see Yasmeena’s face one last time. The journalists were not told clearly whether Yasmeena’s elder brother, Amir Hussain, who works for Border Security Force and is posted in Tripura (the family is not sure where exactly) has been informed about the killing. “He has bought the tickets. He will be home shortly,” said a relative of Wanis. Why has he not been informed about his own sister’s death yet? “He is a young man. A soldier who carries weapon.

Anything can happen,” the relative said. How do they explain the killing and their eldest son working for an Indian paramilitary force? “We are poor. He told me ‘we are poor, I will earn and marry the sisters off’. We can’t ask him to leave the job,” said the mother. Yasmeena has two other sisters, studying and also earning by assisting their father, Abdul Rahman, a Tila worker. Haleema repeatedly calls him a mazoor, a labourer.

GoI caught up in rhetoric over substance about J&K: NC

No Media Gag in Kashmir, All is Well: Mehbooba to Naidu

NHRC issues notices to the MHA and J&K Government

Who Runs J&K if CM doesn't Know anything about the Situation: Omar