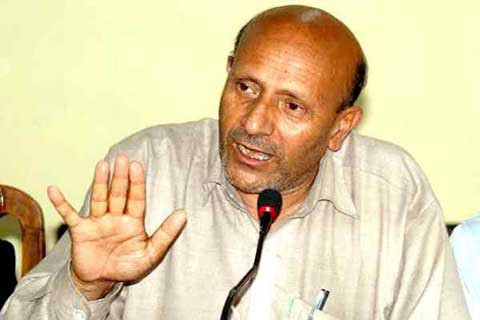 Engineer Rashid,  MLA Langate on Monday accused the Congress and BJP of using “blood of Kashmiris to retain and regain power” in New Delhi and misleading the Indian masses in the name of “so-called” national interest. He also announced to start a peaceful sit- in front of Indian Parliament from July 21.

Addressing a press conference here, Rashid said he will start a peaceful sit-in in front of Indian Parliament from July 21 “to give a wake-up call to the Parliamentarians of India who claim to be representing the world’s largest democracy”.

The MLA said: “Not only that security forces have been given a free hand to kill Kashmiris by bullets and pellet guns but they have reduced the Mehbooba Mufti to the level of a Dak-runner as nothing is in her hands while police and other bureaucrats are receiving direct directions from the home ministry. The ego and arrogance has reached a level where New Delhi seems to have decided not to even give a damn to Kashmiris and force them to surrender. The history has time and again proven that the draconian moves to suppress the victims have always failed.”

Rashid accused Congress of “playing more dirty role than BJP” saying “the dual face of Congress got exposed when there was seen a hell of difference between the statements issued by Sonia Gandhi and that issued for Kashmir media”. “In national media, Sonia left no stone unturned to portray Kashmiris as terrorists and anti-nationals but in a statement issued in Kashmir-based newspapers, she acted like a lone warrior of Kashmiris. The fact is that when Congress was ruling in the Centre, it did nothing to resolve the Kashmir dispute due to the fear that BJP may exploit it among Indian masses. Now when BJP is in power, Congress is repeating the same what BJP did in the past. So, both these parties are busy in playing dirty politics over the enormous sufferings of Kashmiris,” he said.

The MLA Langate reiterated his demand of holding talks with the militant leadership and other stakeholders saying whatsoever he has been pleading and preaching in and outside the assembly since last 8 years “has been proved right beyond doubt”.

He appealed the world community to take notice of “atrocities” on unarmed Kashmiri people. “I will meet ambassadors of various countries in New Delhi and will urge them to use their good offices to save humanity in Kashmir besides persuade India for a durable settlement of the Kashmir dispute,” he said.

Rashid said the “colonial” attitude of Indian state got exposed when it allowed the selective TV channels to put a “manufactured” version of the story from various parts of valley but forced the local print media to stop their publications.

'Kashmir situation is not just about law-and-order'