Apart from reports of death dancing on the streets of Kashmir, daily regional dailies are flooded with short notices informing cancellation of marriages across the valley.

Many marriages were lined up after Eid-ul-Fitr, however, the instant killing of Burhan and the civilian deaths have led to mass postponement of weddings in valley.

The escalating civilian death toll leading to turbulence has been the main reason behind cancellations of marriages. 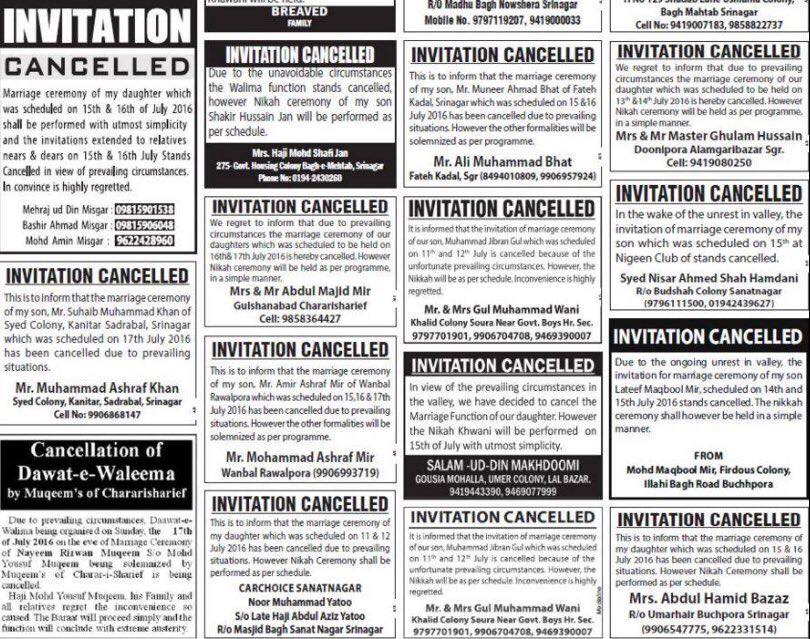 “Though, I had stored all the commodities for marriage months before but due to the prevailing situation I have decided to cancel the marriage of my son,” said Mehraj-u-din Parmu from Srinagar’s Ahmeda Kadal.

On the other hand, Mohammad Ashraf Mir of Rawalpora who has cancelled the marriage ceremony of his son said, “Organising feasts in these turbulent times will put guests in discomfort.” Moreover, Mir said it “is unethical to party amid bloodbath”.

Some people who have cancelled marriage ceremonies are donating all eatables and commodities procured for feasts to hospitals, which are catering to huge rush of bullet and pellet hit injured civilians.

Death toll rises to 33 after another youth killed in Kupwara

'You Are a Part and Parcel Of This Society,’ Hurriyat to JKP