After denying it for months together, the Jammu and Kashmir chief minister Mehbooba Mufti Monday admitted that the proposal for building housing colony for ex-servicemen was under the consideration of the state government. 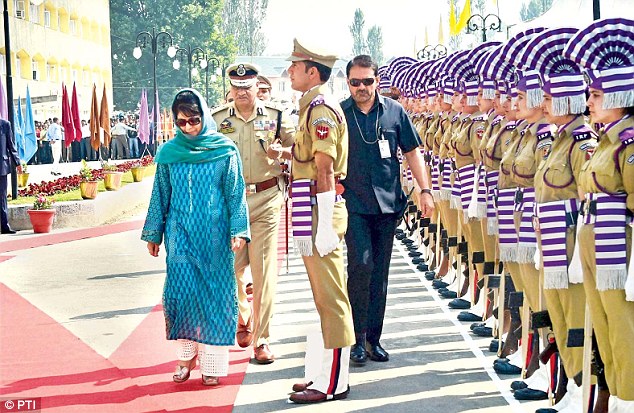 However, Mehbooba targeted the opposition National Conference’s working president and former CM, Omar Abdullah, for spreading “false” information among people over the issue of ‘Sainik Colony’.

“Since Omar Abdullah is not a common man but has been a chief minister, I hope that Omar does not repeat his mistake today in which he has referred to some papers (about Sainik Colony),” Mehbooba said.

Last week, Omar had alleged that “the proposed Sainik Colony would be a ruse to settle non-state subjects in J&K”.

Hitting back at the chief minister, Omar posted a picture from the document regarding allotment ‘of 350 kanals of land for Sainik Colony at Srinagar’ on Twitter, saying: “If you have the guts & truly believe this image is fake file a case against me in the nearest police station TODAY!!”

Mehbooba, however, admitted that the retired army men of J&K have been demanding land for residential colony, but the government has “not allotted” land for establishing Sainik Colony.

“The demand for the Sainik Colony is from ex-servicemen who are state subjects. No ex-serviceman from outside J&K has demanded land for Sainik Colony. But till date the government has not allotted any for establishing Sainik Colony,” Mehbooba said.

Sticking to her father, late Mufti Mohammad Sayeed’s decision for allying with the BJP, she said it was a “difficult decision not for damaging but to safeguard the identity of Jammu and Kashmir”.

US would defend Taiwan against Chinese invasion: Biden

Monkeypox likely to cause more deaths: WHO

WhatsApp rolls out Desktop app for Win and Mac

Bollywood ladies stepping out of their Comfort Zone