Promising to safeguard the honour and dignity of people of the state, Chief Minister, Mehbooba Mufti, today said it is time for the good things happening in the country to find their way into the state of Jammu & Kashmir.

She said she has set many goals and is extremely confident of achieving them with the able support of the Centre and the people of J&K. “I am sure the alliance government in the state will work towards healing the wounds of the people who have suffered enormous difficulties and hardships for more than two decades now,” she added.

It was her first public address in Anantnag after becoming the Chief Minister last month.

Congratulating the people on the introduction of four new trains today, the Chief Minister said she hopes it is the beginning of many more good initiatives which will be taken by the Centre in the state. “As India makes giant strides on the development front, we hope J&K will get its fair share in the country’s rise,” she stated.

The Chief Minister said sound railway network contributes to the productive potential of the economy, including alleviating congestion in the road network and facilitating development. She said it was a cherished dream of her father, Mufti Mohammad Sayeed, to provide people with a dedicated network of trains that crisscross the picturesque Kashmir valley and transcend cultural and religious barriers to connect them with the rest of the country.

Mehbooba Mufti said connectivity is the single biggest determinant of development and trains make commuting easier for those who live far away from their workplaces or colleges. “I am looking forward to the completion of 111-km-long Katra-Banihal Railway Line, which will provide an all-weather link to the Valley,” she added.

Describing as huge the spin off that the rail network will have on the state’s tourism sector, she said that she will take up with the Central government the introduction of a new train service –Valley on Wheels – on the pattern of Palace on Wheels, which has given a huge fillip to the tourism industry of Rajasthan. “Special tourist trains to valley from Ahmedabad, Mumbai and Kolkata will further increase tourist footfall to the state,” she said, while also pitching for Joy Trains for children and family outings.

Highlighting the advantages of railways in promotion of the state’s horticulture sector, Mehbooba Mufti said Kashmir’s wide range of fruits will find it much easier to reach terminal markets and mandis in the rest of the country. “We aim to popularize use of freight trains to better market our fruits so that they are able to reach new destinations in the country well in time,” she added.

Drawing the attention of the people towards the grave threat posed by terror across the globe, the Chief Minister praised India’s pluralism that has bestowed upon its people, including Muslims, respect and honour all over the globe. She, however, rued the prevailing gun culture propagated by a miniscule section, which has maligned the image of the great religion of Islam and wreaked havoc on Muslim nations, right from Iraq, Syria, Libya to Pakistan. “Such is the level of human tragedy that Syrian children are forced to eat paper to survive.” she said, while describing the youth of J&K as her first and prime responsibility.

Describing J&K as a perfect match to India’s multiculturalism, the Chief Minister said J&K occupies a special position in the country’s Constitution. She said she is determined to carry forward the development agenda which will help in changing the perception, which has taken a heavy toll on its economy by affecting its lucrative travel industry. 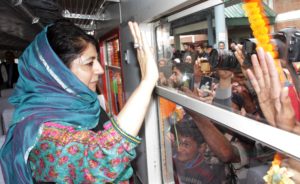 Referring to her recent meetings with the RBI Governor and several foreign delegations over the last few days, Mehbooba Mufti said she will open up new opportunities of employment for the hugely talented youth of the state. She also admired their exuberance and courage for having survived the persistent onslaught of violence.

“We will soon unveil several exchange and assistance programmes for importation of knowledge and expertise so that our youth get tangibly benefitted. The RBI Governor has also assured me of giving first preference to the youth of J&K in jobs in the state’s banking sector,” she said, urging Suresh Prabhu to also facilitate recruitment of skilled local youth in the railways. 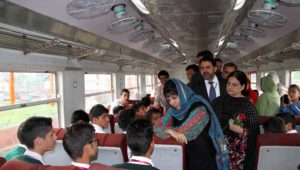 After flagging off the trains, the Chief Minister boarded the newly-launched service and undertook the journey up to Baramulla. She also interacted with several schoolchildren who boarded the train at various stations.

The trains will run six-days-a-week between Budgam and Baramula & Banihal and Baramula. These will have eight coaches with the same speed that are already running on the track but with limited stops.

On her arrival at Srinagar, the Chief Minister also flagged off five SRTC buses that will take passengers from Nowgam Railway Station to Lal Chowk. Out of these, two buses will be reserved for women passengers. The service has been launched on her directions to provide respite to the daily commuters who suffer on account of poor to-and-fro bus service. 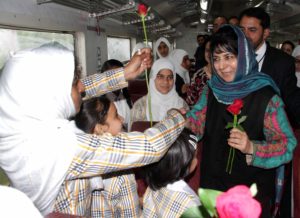